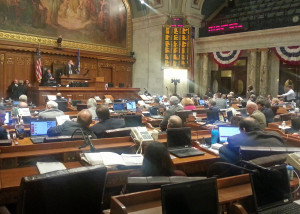 As much of the state remained in bed, the Wisconsin Assembly pushed on Friday morning with a marathon debate over controversial right-to-work legislation.

As of 4 a.m. Friday, the Assembly had been debating a motion to refer the bill to the chamber’s Small Business Committee for more than seven hours. The debate has been marked by several lengthy presentations by members, including a more than hour-long speech by Rep. Chris Taylor (D-Madison).

Democrats have repeatedly questioned why majority Republicans are rushing to pass the bill, which was unveiled just two weeks ago. Rep. Chris Danou (D-Trempeleau) argued that moving the bill back to the committee stage was necessary to give the public more time to weigh in on the proposal.

The bill would prohibit employers from negotiating contracts that require union membership or paying dues as a condition of employment. If it passes in the Assembly, it would go to Governor Scott Walker for his signature. Walker has indicated he will sign it into law by Monday.

The majority of the debate has seen Democrats speaking on the floor, although several Republicans have stood up to deliver remarks. Rep. Michael Shraa (R-Oshkosh) made note of union ties in his past and agreed that organized labor has a place, but also argued that workers should have a choice on joining one. He said “workers are not identical, and they do not have identical goals or ideals. Workers are not create on the assembly line, like robots, to think and act the same.”

Democrats have introduced at least ten amendments to the bill, although none had been voted on yet more than 17 hours into the session day. Lawmakers negotiated a 24 hour time limit on the debate, which would have a vote taking place no later than 9 a.m. this morning.