You are here: Home / News / Youth leader says Madison is not Ferguson 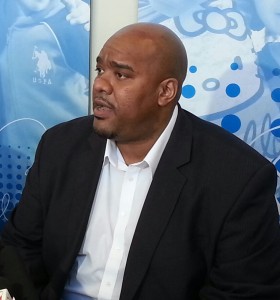 As another day of demonstrations took place in Madison over the shooting of an unarmed biracial teen by a police officer, one leader in the city’s black community said he expects those activities will remain peaceful.

Speaking with reporters on Wednesday, Boys and Girls Club of Dane County CEO Michael Johnson said there has been no violence in the wake of the tragedy yet because the public has had a chance to “vent” their frustration over the death of 19-year-old Tony Robinson. The teen was killed Friday night by a Madison police officer who entered an apartment after hearing a disturbance. Robinson allegedly assaulted the officer before he was killed.

Johnson said Madison is not like Ferguson, Missouri, which was rocked by violent protests last summer following the fatal shooting of an unarmed black man. He said “in this city, you don’t see us flipping over cars, you don’t see our kids and adults looting businesses…people are speaking with their voices.”

Johnson met Wednesday with Governor Scott Walker to discuss the impact of the shooting on Madison’s African American community, and also suggested a number of programs that could help to create better outcomes for black youth across Wisconsin. He also gave Walker contact information for Robinson’s mother, Andrea Irwin, and urged him to call her, which the governor did later in the day.

For the second day this week on Wednesday, area high school students left classes and marched through the central part of he city to demand “Justice for Tony.” The march started at a park near a Department of Corrections office building and ended at the Governor’s Mansion in Maple Bluff.

Johnson said he would prefer students stop missing classes to attend rallies. While he believes it’s important that their voices be heard, he added that they “should demonstrate their civic responsibility during non-instructional time. Don’t leave school.”