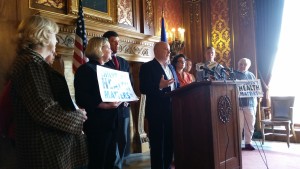 The U.S. Senate is scheduled to vote later this month on whether to fund the Children’s Health Insurance Program (CHIP).

State Representative Melissa Sargent (D-Madison) said, under Wisconsin law, kids on the program will continue to be covered even if the bill dies in the Senate, but at a cost of $84.5 million to state taxpayers. “Us — the taxpayers of our state — will take a hit if Congress and the folks in DC in the Senate can’t figure this out.”

Sargent and Congressman Mark Pocan (D-Madison) are calling on Wisconsin’s two US Senators — Democrat Tammy Baldwin and Republican Ron Johnson — to support passage of the bill.

Pocan said there’s no guarantee in the Senate, even though the bill passed through the House last month with bipartisan support. “It really was a very rare thing to happen. Not quite unicorn rare, but almost to that level. We really wanna make sure the Senate looks at that because there were some grumblings as we were leaving that it might not happen that way.”

Funding for the program runs out at end of this fiscal year. More than 108,000 low-income Wisconsin residents benefit from CHIP, mostly kids.

A U.S. Senate vote is expected the 3rd week of April.