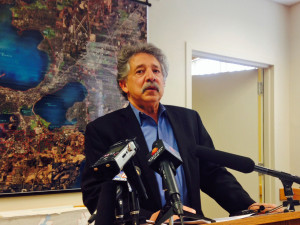 The alleged sexual assaults of two young women in Madison over the weekend have the city’s police and mayor frustrated. A 23 year-old Madison woman said she was touched inappropriately by her Uber driver, who also made comments about liking her and not taking her to her apartment. A 26 year-old woman said a Uber driver grabbed her hand and kissed it and tried to kiss her on the lips. She ran off and later received text messages and phone calls from the driver. It’s unclear whether the same driver was involved in both incidents – and investigators don’t know the name of the driver.

“The company has told us it’s against their policy to provide us, without a subpoena or a search warrant, any more information on this driver,” said Madison police spokesman Joel Despain. Despain said all police had to go on was a receipt sent to the first victim by Uber, and a first name for the driver. Uber said the driver was deactivated from accessing the ridesharing app as soon as the allegation was received.

The Madison common council recently passed an ordinance that would regulate ride share services such as Uber in the same manner as taxi companies. But state legislation would preempt such local ordinances. Madison Mayor Paul Soglin charged state lawmakers with a “they know best” attitude.

The mayor said the name of the alleged assailant would already be known, if he had been a Madison taxi driver. “We can identify every vehicle by both its markings, and its individual license plates and numbers which correspond, and of course the driver,” Soglin said.

Soglin noted that he testified on the state legislation, and asked that it include a provision that a complete list of ride share drivers be provided to local law enforcement. That didn’t happen. “I referred to the company as outlaws,” said Soglin. “That is the history of the company. They come into a community. They break the law consistently. They bully. If they don’t like what the municipality does, they go to the legislature for preemption.”

The bill is now ready for Governor Scott Walker to sign into law – or to veto. “It’s an excellent opportunity for him to do the right thing,” Soglin said.