You are here: Home / News / Badgers get big sendoff 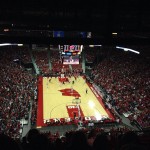 There was a big send-off for the Wisconsin Badgers mens basketball team in Madison on Wednesday night, as they gear up for Saturday’s NCAA Final Four match-up in Indianapolis against Kentucky.

“We’re doing this to thank you for being the greatest fans in America, without a doubt,” said coach Bo Ryan, who coordinated the team to take pictures facing every section of the stands. Fans were lined up outside the Kohl Center more than an hour before the doors opened. After the ceremony, the team boarded a bus for Dane County Regional Airport fo their flight to Indianapolis.