You are here: Home / Business / Barrett says city and county will provide $50 million for Bucks arena 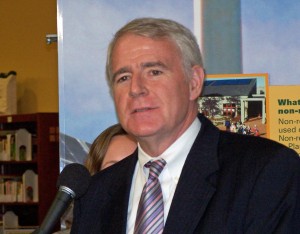 The eyes of Wisconsin sports fans may be focused on the University of Wisconsin Badger basketball team and their second straight NCAA Final Four appearance, but Milwaukee Mayor Tom Barrett said Thursday that he’s not taking his eye off the ball, regarding a new Bucks arena. Barrett said the city and county will pony up $50 million dollars for a downtown NBA arena to replace the aging BMO Harris Bradley Center.

“I’ve had contact with county executive Abele, and the city and the county together will reach that $50 million mark,” the mayor said. The commitment comes as Governor Scott Walker has conceded that lawmakers are unlikely to support $220 million in state issued bonds for the arena. Senate Majority Leader Scott Fitzgerald has floated an alternative plan. Fitzgerald’s goal is to not use any state tax money for the arena financing, so his proposal is to provide $150 million in financing via funds available through the state Bureau of Land Management.

The Business Journal of Milwaukee reported that the city cannot go beyond $25 million because Barrett does not want to tap city tax property money. The city’s $25 million would take the form of $17 million in street and public infrastructure improvements for an arena plus the contribution of an existing city parking structure.

The BMO Harris Bradley Center opened in 1988, and the NBA has issued a mandate that a new facility must either be built or close to completion by 2017. If that doesn’t happen, owners Marc Lasry and Wesley Edens would likely be free to sell or move the team. The Bucks owners have said they need $500 million for a new arena.

“I don’t doubt the numbers, but are there things that can be done to make sure that this is within the budget? Or are there ways to make the budget smaller? Those are other things that can be considered,” said Barrett. “In many ways it’s like purchasing a house or a car. You’re getting closer to it and lets just figure out what we can have.”

Barrett also tried to lay to rest concerns that a deal might not get done, leaving the NFL’s Green Bay Packers and MLB’s Milwaukee Brewers as Wisconsin’s only pro sports franchises. “I will quote that great American philosopher Aaron Rogers: ‘relax.’ We’ll get there,” Barrett said.

The team itself has gotten a lot of favorable attention from Milwaukee fans this season, after finishing last season with the worst record in the league at 15–67, which was also the worst in team history. As of Friday, under first year coach Jason Kidd, the Bucks are 37-38 and in the sixth place in the Eastern Conference playoff race with seven regular season games remaining.