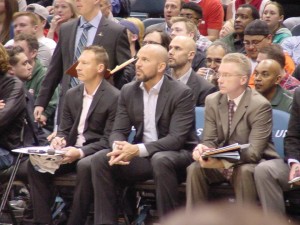 Jason Kidd and his coaching staff

Milwaukee Bucks coach Jason Kidd used his starters very little in the second half, making sure they’re healthy heading into the NBA’s post-season.  The Bucks fell to the Boston Celtics 105-100 in the finale, finishing 41-41 on the season.  That’s a 26-game improvement from the 15-wins of a year ago.

Unfortunately, the Bucks will meet the Chicago Bulls in the opening round of the Eastern Conference playoffs.  The Bucks went 1-3 against the Bulls this season but won the last time out, 95-91 on April 1.

The biggest thorn in the Bucks side when it comes to the Bulls is Pau Gasol.  He scored a career-high 46 points against the Bucks during a game in January.

The Bucks went 11-18 since the all-star break but coach Jason Kidd said it’s still a great start for the Bucks.

AUDIO: Jason Kidd says the Bulls will be a great test :13