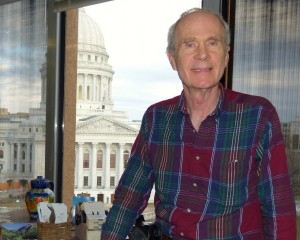 Secretary of State Doug La Follette in his office on the Capitol Square (PHOTO: Jackie Johnson)

The Wisconsin Legislature’s budget committee has signed off on deep cuts to the secretary of state’s office.

The plan, approved Wednesday by the Joint Finance Committee, would eliminate two of three full time staff positions in the office and relocate the secretary of state from a rented office to inside the Capitol building. The change would result in the office going from a roughly 4,000 square foot space to likely something that’s much smaller inside the Capitol.

Secretary of State Doug La Follette called the plan “totally un-thought out nonsense,” and argued it would be a “train wreck.” He noted “We have 3,000 square feet of records. All the records going back to 1800s of the state of Wisconsin. Where are they going to put all that?”

La Follette added that cutting two of his full time staff will also dramatically slow down the thousands of pieces of paperwork his office processes each year.

The governor’s budget had initially called for La Follette to be moved into a basement office shared by the state treasurer. That was dropped by lawmakers though, amid concerns that it could cause a conflict for a public board the two constitutional officers both sit on. Having them together could inadvertently cause a quorum, and the budget panel voted to have a different office location for the secretary of state identified.