You are here: Home / News / Dane County board members consider ban on business with Indiana 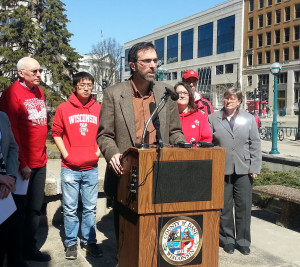 Members of the Dane County Board want to ban county staff from spending money in Indiana.

Several board members are backing an ordinance that would staff travel to or expenditures in Indiana. County Supervisor Kyle Richmond, an Indiana native, says it’s in response to the religious freedom law signed by the state’s governor last month, which critics argue will allow businesses to discriminate against the gay community and others. He says “I feel very strongly that the Religious Freedom Restoration Act that Indiana has passed is bad for the state, it’s bad for our country, and I think Dane County should react.

The push for the travel ban comes as many Badger fans head to Indianapolis to watch the men’s basketball team play in the Final Four of the NCAA tournament.

During a news conference on Wednesday, Richmond could not cite any specific examples of when the county has spent money in Indiana. However, he said county staff travels across the country frequently to attend conferences in other states, which could eventually be held in Indiana.

If adopted, the ordinance would remain in effect until the Indiana law is repealed.