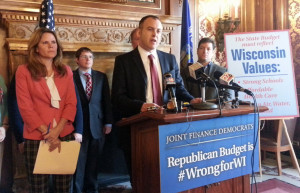 As lawmakers get set to begin making revisions to Governor Scott Walker’s proposed state budget, Democrats are highlighting a number of areas they believe should receive the most attention.

The Joint Finance Committee is expected to take up the biennial budget plan this spring. State Representative Chris Taylor (D-Madison), who sits on the panel, said during a Capitol news conference on Wednesday that majority Republicans need to give serious consideration to the concerns heard during public hearings around the state earlier this year. The Madison Democrat said “it didn’t matter if we were in rural communities, suburban, urban communities – we heard massive opposition to provisions in this budget that really hurt the people of Wisconsin.”

Democrats on the panel sent a letter to majority Republican leaders highlighting their concerns. It calls for stopping any changes to the SeniorCare prescription drug program, protecting the Department of Natural Resources from cuts, and restoring funding to public schools and the University of Wisconsin System. It also calls on the GOP to accept federal funding to expand Wisconsin’s Medicaid program, which they argue would help address a projected budget deficit and provide health coverage for thousands of people.

The Republican co-chairs of the Finance Committee did not respond to messages seeking comment on the letter.