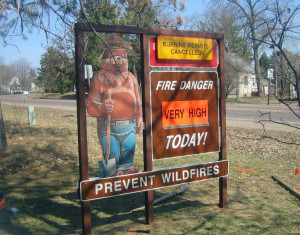 A wildfire covering hundreds of acres led to evacuations Monday in the Juneau County village of Necedah. Department of Natural Resources Public Information Officer Mike Hillstrom said conditions were ideal for the blaze, despite some morning rain. “Very high winds, the relative humidity dropped very quickly throughout the day. Once you get relative humidity below 20 percent, which is what we had, those are prime conditions for fires.”

Residents were allowed to return home late Monday afternoon. There were no injures and no homes were damaged as multiple agencies battled the fire west of the village. “We know for sure at least 200 acres were burned, and the latest estimate is more than 300 acres,” Hillstrom said. “It was a combination of grass burning in the understory and some forest land as well. There was some crowning, but it was not consistent fire getting into the treetops.”

The cause of Monday’s blaze, which the DNR has named the “Railroad Fire,” remains unknown. Fire danger remains high across most of the state for at least the next couple of days. “We’re going to have very low relative humidities again,” said Hillstrom. “It’s going to be a warm sunny day. The winds will be a little bit lighter today, but still very high fire danger.”

Rain only helps so much, to dampen wildfire danger in Wisconsin. “There’s still a lot of grass and other dry things on the ground, so it doesn’t take a long time to go from rain to dry fuels drying out very quickly, and you can get a fire going.”