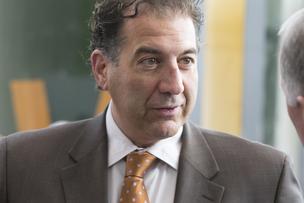 Former Marquette basketball star and chairman of the BMO Harris Bradley Center board, Marc Marotta, died of an apparent heart attack on Wednesday.  He was found unresponsive in his car outside the Wisconsin Athletic Club in Glendale.  Marotta was 52.

Marotta, who is a partner and business lawyer with Foley & Lardner, also served on the boards of Summerfest, Milwaukee World Festival and the Boys and Girls Club of Greater Milwaukee.

The 1984 Marquette graduate was a three-time Academic All-American.  He played his first three seasons under Hank Raymonds and his final season under Rick Majerus.

Marotta was drafted by the New York Knicks but decided to go to Harvard Law School instead.

At the time of his death, Marotta was a part of an ongoing effort to build a new arena for the Milwaukee Bucks.

The Bucks released the following statement on Thursday night.  “Marc was a fantastic friend and ally to the Bucks, but an even better person with a generous heart and an amazing spirit.  His impact was felt throughout the Milwaukee community and he will be dearly missed.”

Marotta is survived by his wife, Kim, and four children.