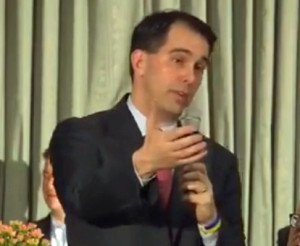 Governor Scott Walker was once again reaching out to Republican voters in New Hampshire this weekend – a key early state for him if he decides to run for president in 2016.

Walker told a crowd at the “First in the Nation Republican Leadership Summit” that the party needs a strong candidate next year, who can win back the White House and work with a Republican Congress to improve the nation. Walker said “what people want more than anything is, they don’t just want a fighter, they want someone who fights and wins.”

Walker pointed out that he has been able to gain the support from independents that’s needed to win elections in Wisconsin.

The governor also took aim at Democrat Hillary Clinton, who announced her run last week. Walker said that a win for Clinton would be like having a third term for President Barack Obama.

Walker used his speech to the group on Saturday to also outline out his views on terrorism, reducing federal regulations on businesses, and cutting taxes.

The governor was among 19 political figures who courted New Hampshire’s presidential primary voters during the weekend.