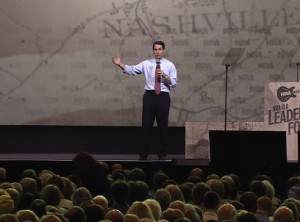 As he continues to ponder a presidential bid, Wisconsin Governor Scott Walker used a speech Friday to the National Rifle Association’s national convention to tout his record on gun rights, while also offering criticism for President Obama’s handling of the issue.

Speaking on the stage in Tennessee, Walker said he is “proud to stand up for law abiding citizens” and their right to possess firearms. Walker pointed to his decision to sign a law creating a castle doctrine in Wisconsin, which allows property owners to avoid prosecution if they fire a gun while defending their property, which he said “was fundamentally about freedom.”

Walker also cited his signing of a concealed carry law for Wisconsin, something he said the previous governor had vetoed multiple times.

The governor, who was just one of several potential GOP presidential candidates speaking at the convention, also fired off criticism at President Obama, accusing him of trying to “pick and choose” what sections of the Constitution he wants to protect. Walker said “we need a president who, once and for all, is going to stand up and defend the entire Constitution.”

Walker also used his speech in Nashville to lay out his philosophy on reducing government dependence and taking a hard line against Islamic terrorism.