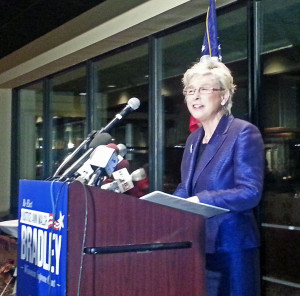 Speaking to supporters in Madison, she declared her victory a sign that voters want to keep partisan special interest groups from influencing the high court. “We sent a message loudly and clearly around the state – that we want our judicial campaigns and our courtrooms to be free of partisan politics.”

Bradley overcame a challenger from Rock County Circuit Judge James Daley, who put some of the blame for his loss on outside groups. During a brief concession speech in Janesville, he congratulated Bradley on her win, but said “we witnessed first-hand the power of incumbency…as liberal special interests band together to protect their candidate.”

The race is non-partisan, although both sides have accused each other of benefiting directly from outside groups with political ties. An independent group ran campaign ads that Daley said benefited Bradley, while the justice repeatedly criticized Daley for taking money directly from the state Republican Party.