You are here: Home / Badgers / Kaminsky is college basketball Player of the Year (Update) 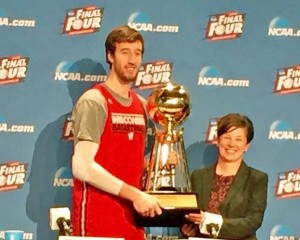 Kaminsky won the Oscar Robertson Trophy earlier, given to the College Basketball Player of the Year.

Kaminsky is the first Wisconsin player to win the AP award, which started back in 1961.  He received 58 votes from the 65-member national media panel that selects the weekly Top 25.  Duke freshman Jahlil Okafor received five votes and Kentucky’s Willie Cauley-Stein and Notre Dame’s Jerian Grant each had one vote.

Kentucky coach John Calipari  was named the AP Coach of the Year.  He received 40 votes as his Wildcats are the first team in 24 years to reach the Final Four without a loss (38-0).  Virginia’s Tony Bennett was second with nine votes and Notre Dame’s Mike Brey got give.

Kaminsky’s Player of the Year honor is the first ever for Wisconsin in college basketball.

Kaminsky passed on a chance to turn pro after last season.  Following Wisconsin’s 74-73 national semifinal loss to Kentucky, Kaminsky decided he wanted to come back to try to win a championship.  He’ll have that chance again, when the Badgers (35-3) face Kentucky (38-0) in the National semifinals at Lucas Oil Stadium on Saturday night (7:49 p.m. Tru-TV).