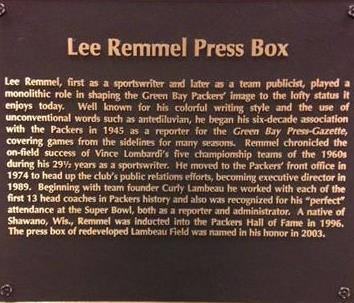 Lee Remmel started covering the Green Bay Packers in 1945.  He would cover coaching legends Curly Lambeau and Vince Lombardi for the Green Bay Press Gazette, then work for the organization before passing away on Thursday at the age of 90.

Remmel became the Packers’ public relations director in 1974 and served in that capacity until 2004.  He became the team’s historian and officially retired in 2007.

Remmel either covered or worked for every Packers coach and was honored at Super Bowl XL as one of 12 media contributors who had worked all 40 Super Bowls.

Remmel was inducted into the Green Bay Packers Hall of Fame in 1996.  It was the same year the Packers went on to win the Super Bowl.

Shortly before his retirement in 2004, the Packers honored Remmel by naming the Lambeau Field Press Box after him.

Remmel didn’t have any children and his wife Noreen passed away in 2012.  The Green Bay Packers were his life.  He was known for his vast knowledge of the team and its history.