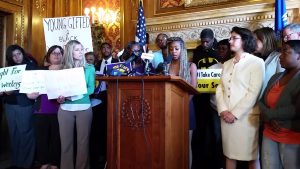 Representative Melissa Sargent and other higher wage advocates speak at the Capitol. Tatiana Anderson is at the lectern. (PHOTO: Jackie Johnson)

Calling it a “human rights” issue, Representative Melissa Sargent (D-Madison) introduced a bill that would more than double the state’s minimum wage from its current $7.25 an hour to $15. “It will raise the state minimum wage to $15 an hour over a five year period. Those wages will then be indexed to inflation so we do not find ourself in this position again.”

The minimum wage in the Badger State is the same as the federal minimum rate, $7.25 per hour.

Tatiana Anderson is a 22-year-old home health care worker advocating for a higher wage. She works more than 60 hours each week at three different jobs, she said, taking care of some of the most vulnerable people in the community for $11 an hour. She bathes and feeds clients, helping them with their medications and providing them company.

“I clean their homes, I clean their wounds. Sometimes my job goes even as far as cleaning up their vomit and other bodily fluids. Sometimes I’m the only person they talk to all week. My job is taking care of people,” she said, “yet I don’t even have enough to take care of myself.” Sounding distressed, Anderson said, “I’m constantly drained. I’m tired. And I’m overworked more than the average 22 year old.”

AUDIO: Anderson explained that she works more than 60 hours a week at three different jobs. :09

Sargent’s bill (LRB-2068) isn’t likely to get much attention from Wisconsin Republicans, who control the statehouse. “You know, we have a tall mountain to climb. I think that we all admit to that being the case.”

Sargent is confident the movement is growing and she said the private sector is responding. Sargent explained, this is the way to move workers from dependence on the government to independence.

AUDIO Anderson has been working since the age of 16, she said, and has nothing to show for it. She’s just living paycheck to paycheck. :16

The Wisconsin Restaurant Association claims an increase in the minimum wage could cost the state thousands of jobs. A report released by WRA showed businesses would either have to raise prices, cut jobs, or reduce hours in order to afford the higher labor costs.