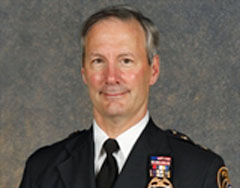 Police in Milwaukee have identified a suspect in a double homicide which occurred after a motorist struck-and-killed a two-year-old boy who darted into the street. The shooter killed 40 year-old Archie Brown Jr. and 15-year-old Rasheed T. Chiles, the toddler’s brother who ran after 2-year-old Damani Terry. Brown had stopped at the scene Sunday after striking the child.

“We had some clown take the law into his own hands and murder a guy who was doing what we expect good citizens to do, and – oops – accidentally kill somebody else,” Milwaukee Police Chief Edward Flynn said Tuesday. “We’re after that guy, we know who he is.”

The murders are among at least 43 in Milwaukee so far this year. The latest occurred around 6:30 Tuesday night in a north side neighborhood, where police said a 63-year-old man was severely beaten. He died later at a hospital. Earlier, several suspects were arrested in the shooting death of a man at around 2 p.m. And on Tuesday morning, a 30-year-old woman was arrested for stabbing a 24-year-old man to death in a domestic disturbance. Names of those three victims were not immediately released.

Flynn also told reporters that 17-year-old Shaniece McClain was an innocent bystander on Monday night, when she was fatally caught in gunfire which erupted after two groups of girls got into a fight, and called their boyfriends who brought guns. “Circumstances are clear,” the chief said. “It was some kind of stupid fight. It’s a typical phenomenon here. Somebody gets in a fight, somebody picks up a cellphone, and the cavalry comes with guns in their cars.”