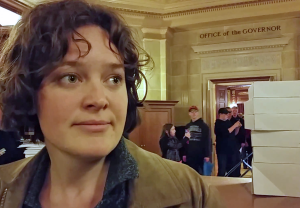 Coinciding with Earth Day, a handful of individuals make a delivery to the governor’s office in Madison.

Climate activists want Governor Scott Walker to condemn the implementation of a Public Lands Commission policy that would prohibit staff from using taxpayer time to work on global warming issues. That ban “just limits the dialog,” says Vera Pfeiffer, a PhD student at the Nelson Institute. “It prevents public employees from doing their job and acting in the public interest.”

Pfeiffer says ignoring climate change does nothing to remove its threat.

Donned with duct tape over their mouths, participants delivered more than 100,000 petition signatures to the governor’s office. “So this silent walk and with these petitions and the duct tape across people’s mouths represents the fact that this is a gag measure, this is censorship.”

Republican State Treasurer Matt Adamczyk had said the board’s executive secretary, Tia Nelson, can talk about global warming and climate change on her own time.

Tia Nelson is the daughter of Earth Day founder Gaylord Nelson. Adamczyk, Attorney General Brad Schimel, and Secretary of State Doug La Follette make up the Board of Commissioners. Schimel backed Adamczyk in imposing the rule, while La Follette opposed the move.