You are here: Home / Brewers / Rockies are locked in on the Brewers 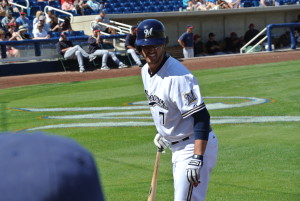 The Colorado Rockies put on another offensive display Tuesday night at Miller Park, pounding out 12 hits in a 5-2 win over the Milwaukee Brewers.

The Rockies have 28 hits in the first two games, including 12 doubles.  Brewers starter and loser Matt Garza said it appeared at times that the Rockies knew what pitch was coming.

AUDIO: Matt Garza on the Rockies hitters being locked in :14

The Brewers came out of spring training as the best offensive team in the Cactus League.  But they’ve started the first two games of the season collecting just 14 hits in the two games and 11 of those 14 hits have been singles.

The Brewers failed to score a run in the first 13 innings of the season, but finally broke through for a pair of runs in the fifth against Rockies starter Jordan Lyles.  The Brewers were hoping for more, but pinch hitter Logan Schafer grounded into a double play.

The Brewers dodged a bullet in the fifth when Lyles hit Brewers shortstop Jean Segura with a pitch, striking the bill of his helmet and caroming off his nose.  But Segura would be alright.  He stayed in the game.

The Brewers will try to salvage the final game of the series tonight when they send Wily Peralta to the mound.

Rightfielder Ryan Braun missed last night’s game but an MRI on his sore right side showed no significant injury.  That’s good news for the Brewers, who say Braun should return to the lineup soon.