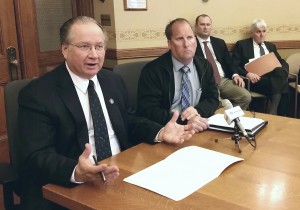 The Senate Transportation Committee unanimously (5-0) approves an amended bill (AB-27), which would allow the Department of Transportation to increase speeds from 65 to 70 mph, but only on certain roads.

Keeping in mind the restriction on sections of highways with cross traffic, Petrowski said the DOT would determine where higher speeds would work. “I think you can see some of the roads, probably the main interstate roads, going to 70 miles an hour — at least some of them — probably sometime this spring and summer.”

A frequently cited example of concern is Highway 29, which runs east-west across the middle of Wisconsin, linking Green Bay to Wausau to the Chippewa Valley and continuing toward Minneapolis, Minnesota. Despite recent major improvements, the expressway still has potentially dangerous sections with dangerous crossings and driveways where motorists could dart into high-speed traffic. Driver safety in those areas would decrease with increased speeds. Petrowski’s Senate substitute amendment addresses those issues.

A similar bill stalled in the Senate Transportation Committee in the previous legislative session because of safety concerns. Those concerns were addressed in this legislation which now heads to the full Senate. If passed, it would need approval in the Assembly, which passed the un-amended version in March. Both houses need to pass an identical version before going to the governor.

Petrowski said he believes, as amended, the legislation is likely to get a lot of support at the Capitol, and he says it will reduce fatalities on the roads.

Neighboring states have increased their maximum speeds to 70 mph, while Wisconsin’s top speed remains at 65.