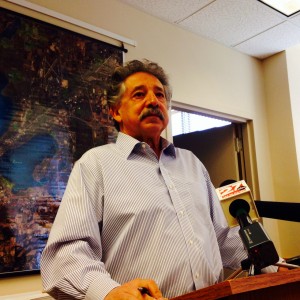 Madison’s mayor said Thursday that the city is prepared, for when a decision is made on whether or not to charge the police officer who shot and killed a black teen.

It’s been three weeks since the state Department of Justice handed off its review of the fatal shooting of 19-year-old Tony Robinson by Officer Matt Kenny to the Dane County District Attorney’s office, and while it’s not known when a decision will be reached, Mayor Paul Soglin said city officials are ready to deal with the possibility of protests if Kenny is not charged.

“We have everything arranged from traffic controls to police officers,” Soglin said.

Robinson’s death has spurred ongoing protests. “People in my office, the police department, the fire department . . . every one of us have the same objective, which is to honor the right to protest, to keep everyone as safe as possible,” the mayor said.

Soglin spoke with reporters to give his views on a demonstration which took place on Tuesday as part of a nationwide action protesting violence by police and officer-involved shootings.

Four people were arrested and 11 others issued citations, after protesters had blocked traffic on busy East Washington Avenue for several hours.

“In the future, while all of these protests are evaluated on a case by case basis, we will not be facilitating extended street closures,” Soglin said.

The mayor agreed with Madison Police Chief Mike Koval, who said that videos of Tuesday’s arrests showed that officers were not violent, countering a claim by a spokeswoman for the Young, Gifted and Black Coalition, which helped to organize the action.

“We have to understand, that in the true spirit of civil disobedience and passive resistance, there is to be no resistance on the part of the individual being arrested, and there is to be no interference with the arrest, by any outside party,” Soglin said.

The mayor said members of Young, Gifted and Black are “reticent about formally meeting with city officials, but we do try to keep in contact with those that meet with them.”