You are here: Home / News / Talks to continue on new Bucks arena 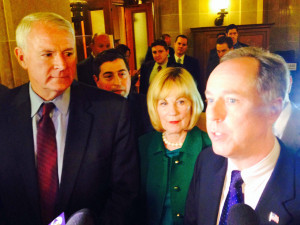 Talks are expected to continue in Madison on Thursday, as elected officials attempt to find resolution on funding a new NBA arena in downtown Milwaukee.

State and local leaders including Milwaukee Mayor Tom Barrett and County Executive Chris Abele huddled in the executive wing at the Capitol on Wednesday, but emerged without a deal.

“The good thing is, I think the Board of Commissioners of Public Lands still seems to be the primary option, and that’s really kind of moved us along compared to where the governor was with the high level of bonding originally,” said state Senate Majority Leader Scott Fitzgerald (R-Juneau).

A key element of any deal will be a loan to the city and county – how large is yet to be determined – from the Board of Commissioners of Public Lands.

“The most important one is to keep the Milwaukee Bucks, and all the opportunities that we see with an exciting new venue in downtown Milwaukee, and do it in a way that continues to be responsible for taxpayers,” said Vos.

Vos said any funding plan will likely remain part of the state budget. “I can’t see a stand alone bill at this point,” Vos said. “We’re still negotiating, I don’t want to say never, that would be probably something that would be a much higher lift.”

“We all share the same goal, which is to make sure that we have the Bucks stay,” Barrett said. “At the same time we all have responsibilities. It was a good give and take, and we’re going to continue negotiations.”

“The Bucks are pleased. I think everyone in the room is very positive, and it’s very collaborative,” said Bucks President Peter Feigin.