You are here: Home / News / Tweaks needed in 70 mph speed bill before advancing 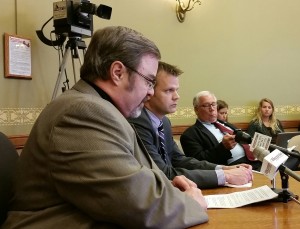 A bill to increase the speed limit got a public hearing in a Senate committee at the Capitol Tuesday.

The bill (SB-26) would give experts at the state Department of Transportation the option to increase speed limits to 70 miles per hour on some highways. The measure passed through the Assembly last month. It is currently being considered in the Senate transportation Committee, where it stalled in the previous legislative session due to safety concerns.

Senator Jerry Petrowski (R-Marathon) chairs that committee. “I think there is support to allow DOT to increase the speed limit to 70 miles an hour,” he continued, “First of all, on the interstate system and then on separated, divided highways — basically freeways — where there are no at-grade crossings.”

A frequently cited example of concern is Highway 29, which runs east-west across the middle of Wisconsin, linking Green Bay to Wausau to the Chippewa Valley and continuing toward Minneapolis, Minnesota. Despite recent major improvements, the expressway still has potentially dangerous at-grade crossings and driveways where motorists could dart into high-speed traffic. Petrowski worries driver safety in those areas would decrease with increased speeds.

AUDIO: Petrowski said the posted speed would fluctuate so frequently that it could confuse motorists. :12

Under the legislation, DOT traffic safety engineers would determine whether a higher speed would impact safety. Petrowski said many factors have created an atmosphere for lower traffic fatalities in recent years. “It could be speed, of course,” he said. “It could be weather … the use of seat belts, the fact that we’ve strengthened the laws for DWI, the engineering on our roads today is much better than it was years ago.”

AUDIO: The interstate system is designed for speed. And roads that don’t have driveways and at-grade crossings or other safety concerns could see higher speed limits. :46

State Representative Paul Tittl (R-Manitowoc) sponsored the bill in the Assembly. He said during Tuesday’s public hearing that today’s vehicles are much safer. “We have different braking systems, mandatory child car seats, vastly improved seat belts, and mandatory air bags. A lot has changed since 1973” when the speed limit was reduced and, Tittl explained, it had nothing to do with safety. “The federal government set a maximum speed limit of 55 miles per hour to conserve fuel during the energy crisis of the early ’70s. States that did not decrease their speed limit actually faced losing federal transportation dollars.”

The National Maximum Speed Law (NMSL) was a provision of the 1974 Emergency Highway Energy Conservation Act.

State Senator Devin LeMahieu (R-Oostburg) sponsored the Senate bill. “Roads are built to handle the speed. It’s not the speed limit that causes injuries, it’s people not paying attention to what they are doing when they’re driving or driving impaired.”

Committee members are “very much safety minded,” Petrowski said, and there needs to be “some changes to the bill.” Though, he acknowledged there is support for a higher speed limit on some roads.

AAA Wisconsin opposes the measure, citing safety concerns. Nick Jarmusz with the auto club said allowing semi-trucks to increase their speed can significantly reduce the amount of time and distance it takes for those drivers to come to a stop in an emergency.

Neighboring states have increased their maximum speeds to 70 mph, while Wisconsin’s top speed remains at 65. The Committee on Transportation and Veterans Affairs heard public testimony on Tuesday afternoon at the Capitol.  The legislation passed the Assembly March 17 on a bi-partisan 76-22 vote.