You are here: Home / Education / UW president optimistic funding cuts will be reduced 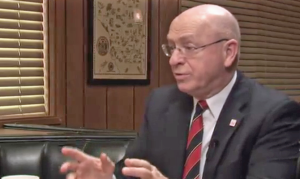 It is very unlikely the state legislature will restore much of the $300 million proposed cuts to the University of Wisconsin System in the state budget. That’s what Senate Majority Leader Scott Fitzgerald (R-Juneau) told WKOW TV in Madison, but UW System President Ray Cross isn’t buying it.

“I disagree with the senator,” he says, “I think there will be changes.”

That $300 million cut to the university system is more like $350 million, according to Cross, when considering delayed expenses and other things. He’s working closely with lawmakers and the governor’s office.

Also, Cross doesn’t plan on leaving his job anytime soon, despite his response to a question about that very subject. “I really do believe the legislature wants to work with us,” Cross said.

When an English professor recently asked whether he’d resign if he didn’t get at least some of the budget cuts restored to the UW System, Cross famously answered in the affirmative. Though, after the budget is signed into law, Cross still plans on being president, he said.

“My answer was really a reflection of the confidence I have in the conversations we’re having with legislators.”

The UW’s portion of the budget bill likely won’t be taken up by the Joint Finance Committee until the end of May. So, Cross said optimistically, “we have some time.”