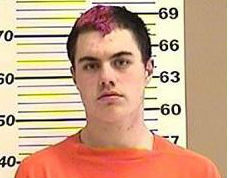 A 17-­year-­old Vernon County man faces attempted homicide charges, after allegedly stabbing a Neillsville man three times in the neck during a party.

According to the criminal complaint, Mathew Gebhardt was at a party at a home in the Town of Levis earlier this week, when he asked his sister to drink a shot with him. She agreed, but only if she could punch him in the face. Gebhardt allowed it, but after he was punched, his girlfriend objected and started arguing with the sister. That prompted a fight between Gebhardt and another man. The complaint says Gebhardt pulled a knife during that altercation and stabbed the victim multiple times in the back of the neck.

The 27­-year-old victim was taken to an area hospital by others attending the party before police arrived at the scene. Police says the man did have life threatening injuries, but will survive.

Bond was set at $500,000 Thursday for Gebhardt, who will make an initial appearance on the charges April 23rd.