You are here: Home / News / Walker meets with GOP in Iowa 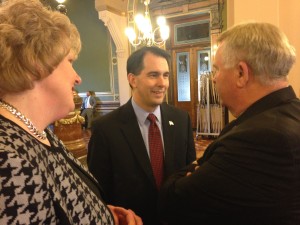 Wisconsin Governor Scott Walker, a likely presidential candidate, met privately with Republicans who serve in the Iowa House and Senate Tuesday. After he posed for pictures with legislators, Walker spoke briefly to Radio Iowa.

“We’ll keep coming back over and over again,” Walker said. “But I think for most folks the big thing that people want is a leader that’s going to fight and win for the American taxpayers.”

Walker’s staff then escorted him out of the room and, as he walked through the statehouse rotunda, Walker stopped to chat with an Iowa community college president.

Walker will return to Iowa this weekend. He’ll be one of the speakers at Saturday’s Iowa Faith and Freedom Coalition event in Waukee. His meetings at the statehouse today were designed to court legislators who may endorse his candidacy.