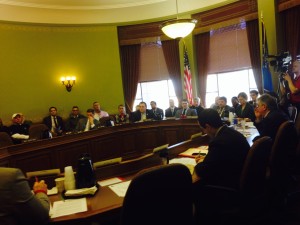 Can drivers for rideshare services discriminate when it comes to accepting ride requests? The issue came up during public hearings on state legislation that would regulate services like Uber and Lyft on a statewide basis. Robert Kellman with Uber’s Midwest office in Chicago was asked to address the question during a hearing before the Assembly’s committee on government operations.

“In the driver terms of service, what all drivers must agree to before they’re allowed access to the app, they’re made familiar with our antidiscrimination policy, which I think frankly is as thorough as you can make one,” Kellman said, adding that a study Uber conducted in Chicago found that 52 percent of the service’s rides began or ended in neighborhoods which the city of Chicago classified as underserved by taxis.

But state Representative Lisa Subeck (D-Madison) who is also a member of the Madison Common Council, claimed language contained in Uber’s driver agreement appears to contradict the claim. “It says ‘ you shall be entitled to accept, reject and select among the requests received via the service. You shall have to obligation to accept any request.’ Quite frankly that flies in the face of anti-discrimination,” said Subeck.

Subeck suggested that the legislation could be amended to address the concern. “I believe that the state should require reporting on accepted and denied rides,” she said.

The legislation introduced at the Capitol on Monday would require rideshare services, which typically connect drivers and customers through mobile phone applications, to apply for a state license and pay an annual $5,000 fee. Drivers, who operate as independent contractors, would have to pass background checks, operate vehicles that meet strict safety regulations, and carry at least $1 million in commercial insurance.

Uber’s Kellman suggested that passing the bill could lead to the availability of the service in rural areas of the state which are underserved by traditional taxi operators. “The way it’s worded essentially turns the app on statewide,” he said. “What it does is allow for drivers from across the state to meet demand where that demand is.”