You are here: Home / Brewers / 1st inning outburst is enough for Peralta in Brewers win 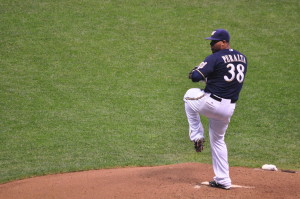 Peralta went to work from there.  He allowed three runs (2 earned) on seven hits while striking out six in eight innings to earn his first win of the season.

Joe Wieland (0-1) was recalled from the minor leagues earlier in the day and took the loss.

Francisco Rodriguez pitched the ninth for his sixth save in as many chances.  The Brewers have won four out of five, but still own the worst record in the majors at 9-19.

For the Dodgers, Joc Pederson homered twice, giving him 7 in his last 9 games.  First baseman Adrian Gonzalez added three more hits to increase his career batting average to .417 at Miller Park.  Gonzalez has reached base in 10 of 13 plate appearances in the series.

The Brewers and Dodgers wrap up their four game series at Miller Park this afternoon.  Mike Fiers (1-3, 4.74 ERA) pitches for the Brewers.  The Dodgers will counter with Carlos Frias (2-0, 0.00 ERA).