You are here: Home / Sports / Antetokounmpo suspended for 1 game 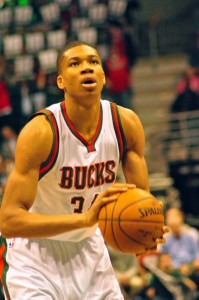 Milwaukee Bucks forward Giannis Antetokounmpo was suspended for one game without pay by the NBA on Saturday for tackling Chicago Bull forward Mike Dunleavy.

Antetokounmpo was issued a flagrant foul 2 and ejected from the Bucks’ season-ending 120-66 playoff loss to the Bulls last Thursday.  It means Antetokounmpo will have to sit out the first game next season for which he is eligible and physically able to play.

The NBA also said Dunleavy’s contact to Michael Carter-Williams’ jaw has been upgraded to a flagrant foul 1.

Antetokounmpo said, “It’s not going to happen again.  From the intensity of the game, the cheap shot, down 30, you know, you live, you learn.  It was a bad mistake by me.”