You are here: Home / Sports / Brady to miss four games, for now! (Video) 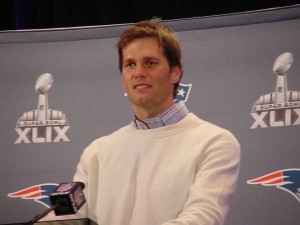 The National Football League may have come down hard on New England Patriots quarterback Tom Brady, but will it stay that way?

The league suspended the Super Bowl MVP on Monday for the first four games of the season.  The NFL also suspended the Patriots $1 million and took away first and fourth round draft picks over the next two years.

In a message to Brady, NFL executive vice president of football operations Troy Vincent wrote, “Each player, no matter how accomplished and otherwise respected, has an obligation to comply with the rules and must be held accountable for his actions when those rules are violated and the public’s confidence in the game is called into question.”

Brady has three days to appeal the suspension.  His agent says it will happen.

The Patriots say they were ready to accept any punishment, but when it was handed down, the organization thought it was too severe.  They also feel the punishment was based completely on circumstantial rather than hard or conclusive evidence.

Vincent wrote letters to the team and Brady saying a league-sponsored investigative report established “substantial and credible evidence” that the quarterback knew the employees were deflating footballs and failed to cooperate with investigators.

It’s the second time in eight years the Patriots have been punished for violating league rules.  In 2007, the team was fined $500,000 and docked a first-round draft pick, and coach Bill Belichick was fined $250,000 for videotaping opposing coaches as a way to decipher their play signals.

Brady hasn’t cooperated with investigators and has been in total denial to the league with regards to his potential involvement in the deflation of footballs.

Will the 4-game suspension be reduced?  The answer to that question is still ahead.