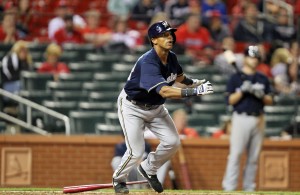 The Milwaukee Brewers managed just six hits and scored just once, a growing trend for the team offensively.  The result was a 3-1 loss to the San Francisco Giants in their series finale at Miller Park on Wednesday.

The Brewers fell to 8-18 at Miller Park and a Major League worst 16-32 for the season.  Not that the Brewers are looking to the top of the division, but they now trail the front-running St. Louis Cardinals by 15 1/2 games.

Without any offensive support, Mike Fiers, while pitching on short rest, held the Giants to two runs, but fell to 1-5 on the season.  He gave up Joe Panik’s 2-run homer in the 5th.

The Giants scored their 3rd run in the 9th, off of Francisco Rodriguez.  San Francisco has now won 11 of their last 13 games.

Khris Davis tripled in his first two at bats, one with one out and the second with no outs.  In both cases, the Brewers failed to drive him in.  The teams only run came on Elian Herrera’s run scoring single to left.

Jean Segura will return to the lineup on Friday night against Arizona and Jonathan Lucroy is expected to return to action Monday in St. Louis.  The Brewers are hoping those two additions will kick-start the offense.

The Brewers get the day off today.  They’re expected to send one of their nine relievers to the minors before Friday’s series opener with Arizona, opting to add a starting pitcher to replace Wily Peralta’s spot in the rotation.