You are here: Home / Brewers / Brewers to recall Tyler Wagner from Double-A 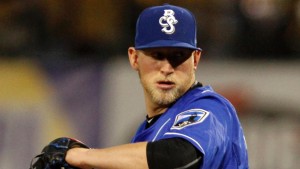 The Milwaukee Brewers announced Friday that right-hander Tyler Wagner would be recalled from the teams double-A affiliate in Biloxi, Mississippi, and start in Sunday’s series finale against the Arizona Diamondbacks at Miller Park.

Wagner was a fourth-round draft choice out of the University of Utah in 2012, will take the place of Wily Peralta, who will miss four to six weeks with an oblique strain.

The last pitcher to make the jump from Class AA and start a game for the Brewers was Tyler Thornburg, who is currently pitching at Class AAA Colorado Springs.