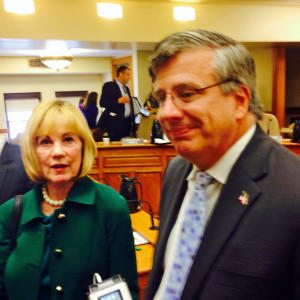 Wisconsin Governor Scott Walker’s plan to create a public authority for the University of Wisconsin System will not gain the approval of the legislature’s budget committee, according to the panel’s co-chairs.

“There’s agreement between Senator Darling and myself to say ‘no’ to the UW authority,” said state Representative John Nygren (R-Marinette). “It’s an idea that potentially has some merit, but that needs a little more time to study it, to see what its true impacts would be.”

Governor Walker had proposed the public authority in combination with some $300 million in state funding reductions.

“While we’re not saying it’s a bad idea . . . we’re just not in a position to implement it in this budget,” said state Senator Alberta Darling (R-River Hills).  “Everybody’s concerned with UW System and the cuts, and we want to make sure that there are flexibilities that go along with these cuts.”

The finance committee on Tuesday deferred action on several UW-related items, and will take up a larger package later, Nygren said.

With new state revenue projections expected soon, the co-chairs indicated that funding for UW would be a budget priority, along with K-12 education and transportation projects. Nygren said the total amount of cuts the UW will need to absorb have not been determined.

He indicated that procurement and mandate relief would be areas where lawmakers would look to provide the UW System with flexibility.