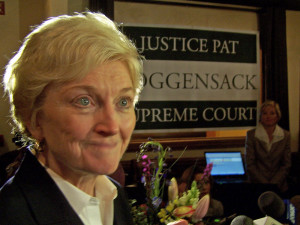 The head of the state Supreme Court says she has not spoken with her predecessor since assuming the position just a little over two weeks ago.

In an interview with WisconsinEye, Chief Justice Pat Roggensack said she has doubts a “fruitful conversation” is possible right now between her and Justice Shirley Abrahamson. “I know this is hard for her…and I’m trying really as best as I can not to make it any more difficult than it has to be,” she said. “When the lawsuit is over and things calm down, we’ll have time to talk with one another.”

Abrahamson has filed a federal lawsuit challenging a state constitutional amendment that changed the process for selecting the chief justice. The amendment, adopted by voters in early April, requires members of the high court to vote on the justice, rather than having the most senior member of the court fill that role. Conservative members of the court nominated and then elected Roggensack to serve as chief justice shortly after the election results were certified, despite objections from Justices Abrahamson, Patrick Crooks, and Ann Walsh Bradley.

Roggensack also denied that the contentious leadership change has caused chaos in the court system, which some opponents of the vote have claimed in court filings.

A federal judge last week refused to temporarily reverse the vote that removed Abrahamson as chief justice. Her lawsuit is ongoing.