You are here: Home / Brewers / Craig Counsell hired to manage the Brewers 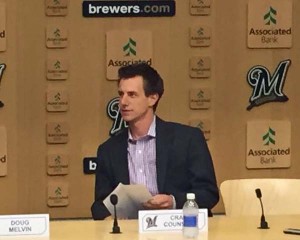 The Milwaukee Brewers have officially named Craig Counsell the 19th manager in franchise history, signing him to a three-year contract through the 2017 season.  Counsell replaces Ron Roenicke, who was fired on Sunday night.

“Craig has many years of Major League playing experience, and his three-plus years of learning all aspects of baseball operations helps prepare him for this managerial position,” said Brewers General Manager Doug Melvin in a statement released by the team today.  “There will be challenges, but Craig has never shied away from leadership responsibilities on the field as a player or in his most recent role.  I believe his on-field success as a player and his awareness for preparation should resonate in the clubhouse.  Growing up in Milwaukee, it is very important for him to bring a winning culture and team success to Brewers fans.”

The 44-year-old Counsell joined the front office on January 17, 2012 as special assistant to the general manager.  Counsell hit .255 with 42 home runs, 390 RBI and 103 stolen bases in 1,624 games with Colorado, Florida, Los Angeles, Arizona and Milwaukee.  He was a member of World Series championship teams with Florida (1997) and Arizona (2001), and was named the MVP of the 2001 National League Championship Series.

Counsell is a 1988 graduate of Whitefish Bay High School and 1992 graduate of the University of Notre Dame.

The Brewers fired Ron Roenicke just 25 games into the season.  The teams 7-18 record is the worst in the majors.

Prior to the 25-game start this season, the Brewers finished up last season by losing 22 of their final 31 games to fall out of the playoff picture in the National League.

Roenicke had the 2016 option on his contract picked up during spring training.  It’s hard to believe that a management team could feel so strongly about a manager to give him another year on his contract, then turn around and fire him 25 games into the season.

The Brewers took 2 of 3 in their weekend series with the Cubs in Chicago, but the decision was made prior to that series.  Melvin said they needed time to put a new manager in place.  The teams coaches were invited to remain in their present capacity.

Counsell takes over immediately and will be on the bench when the Brewers open a 4-game series against the Los Angeles Dodgers tonight at Miller Park.