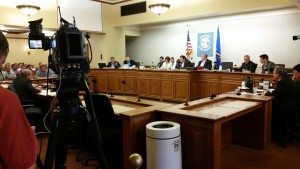 Assembly Labor Committee chair Andre Jacque (R-DePere) says he has the votes to advance the bill. “Obviously I do believe I have the support for this otherwise I would not be bringing it forward.”

Christine Sinicki (D-Milwaukee) says the proposal is being crammed through on short notice. “So your intention then, if I understood you right, is to try to pretty much sneak this into the budget at the last minute.

Senator Leah Vukmir (R-Wauwatosa) authored the Senate bill. Even though Democrats disagree, she and other Republicans say a full repeal would save millions of taxpayer dollars. “Prevailing wage is an enormous unfunded mandated from state government.”

GOP leaders in both chambers have said they don’t yet have the votes to support a full repeal, but are instead looking into reforming the current law.

Prevailing wage requires construction workers involved in government projects be paid a set minimum wage based on a state formula.

The Senate bill failed to pass through committee earlier this month. Author of the Assembly bill Representative Rob Hutton (R-Brookfield) also testified before the committee. He calls the law “archaic.”