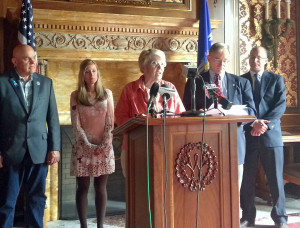 Wisconsin Assembly Democrats say expanding the statewide private school voucher program will result in public schools losing up to $800 million over the next decade. The claim is based on a report from the non-partisan Legislative Fiscal Bureau, which looked at a provision added to the state budget last week by Republicans that lifts the enrollment cap on the program and changes how it is funded.

During a news conference at the Capitol Thursday, Assembly Democrat Sondy Pope (D-Cross Plains) called it’s just the latest in an ongoing assault against public education. “There is no doubt about it – this budget will further harm our already financially struggling public schools,” Pope said.

Pope argued the cuts will devastate the future of public education in the state, and claimed Republicans are “selling out” public school students in order to provide a boost to a potential presidential bid by Governor Scott Walker. Republicans have maintained that efforts to expand voucher schools are because of growing demand for the program, and that parents should be given the flexibility to send their children to a school that best fits their needs.

Pope, the ranking Democrat on the Assembly Education Committee, said GOP lawmakers are ignoring what the people of Wisconsin actually want though by proposing “swift and harmful changes that represent one of the most drastic changes in education in a lifetime.”