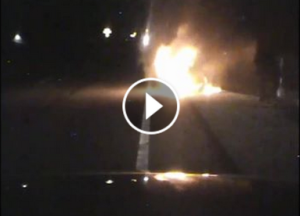 A Brown County Sheriff’s deputy is being called a hero after rescuing a man from a burning vehicle overnight.

Deputies responded to a vehicle on fire on Wednesday at approximately 2:00 am. They arrived to find the vehicle in the ditch with a man inside

Deputy Zach Roush was the first on scene. He approached the vehicle, opened the door, and attempted to get the driver to come out, but that driver was dazed and refused to cooperate.

According to a press release from the Brown County Sheriff’s Department, “Deputy Roush eventually grabbed the man by the belt and pulled the man from the vehicle, saving his life. The fire and smoke was dangerous enough that he almost abandoned his rescue attempt for his own safety. High winds caused the flames and smoke to move in dangerous and unpredictable ways making the mere approach to the vehicle extremely dangerous. There is no doubt that without Deputy Roush’s quick action, this accident would have been a fatality.”

The rescue was captured on Deputy Roush’s dash cam.

The driver was rushed to the hospital for evaluation, then arrested on suspicion of 3rd offense OWI.