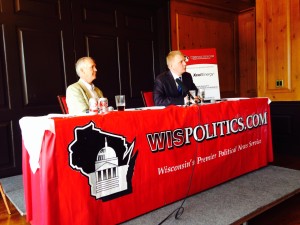 Don’t underestimate Scott Walker as a potential presidential candidate. That was the message Thursday from the outgoing chairman of the Democratic Party of Wisconsin.

Mike Tate’s tenure at the helm of the DPW will end at the state party convention in Milwaukee June 5-6, when delegates will elect a successor. Tate was the guest at a WisPolitics luncheon during the noon hour in Madison.

Tate was asked about Governor Scott Walker, the as yet undeclared candidate for president.

“I think that anybody who underestimates Scott Walker is falling into the trap which has led to Scott Walker’s success over the past 15 or 20 years, which is that he does well when people underestimate him,” Tate said.

But Tate, who said he’s gotten to know Republicans including Assembly Speaker Robin Vos and U.S. Representative Paul Ryan, said Walker isn’t like those veteran politicians, who he said have a “moral compass,” and believe they’re doing the right thing for Wisconsin.

“And this may be harsh, I genuinely do not believe that Scott Walker has that moral compass . . . like a Paul Ryan or like a Robin Vos. And It think it allows him to be extremely malleable,” Tate said.
“In a business where ambition and ego do fuel people, it’s a question of do you use that ambition and ego for good or for ill, and I think Scott Walker uses it purely for his own advantage,” he said. “I don’t think he wakes up every morning wondering ‘how can I make like better for Wisconsinites?’ I think he wakes up every day wondering ‘how can I be President of the United States?’ And I think he’s been doing that for the past 20 years.”

Still, Tate said Walker could be an effective candidate, at least in the early going against other GOP presidential hopefuls. “I think the guy could go down to South Carolina and be able to talk the talk of, as Mitt Romney would say, the severely conservative governor, but also be able to present the veneer and facade of authenticity that has served him well in Wisconsin.”