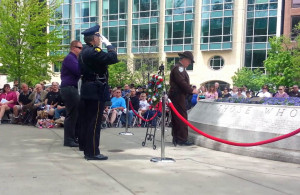 Polk County Sheriff’s Deputy Michael Seversen was just 27-years-old when a gunshot wound left him paralyzed from the neck down. Despite his injuries, he returned to western Wisconsin and proceeded to give the rest of his life to his community, speaking to schools and other groups around St. Croix Falls.

Seversen died last April as a result of complications related to his injury, almost 23 years to the day of the shootout with a suspect that injured him and claimed the life of another officer.

Seversen’s sacrifice was honored Friday as his name joined 265 others listed on Wisconsin Law Enforcement Memorial on the Capitol Square. Former Polk County Sheriff Craig Benware said his former deputy never let his injury diminish what he had set out to do in the first place…change people’s lives and help them in everyday situations.

Attorney General Brad Schimel said Seversen exemplified many of the words listed on the memorial, such as ‘duty’ and ‘valor.’ He said Seversen showed what it meant to “serve with honor and courage.”

“Every name on this wall has a story,” Schimel said. “A life of service and dedication that inspires us.”

Governor Scott Walker also offered praise for Seversen and other fallen officers, saying “we remember not just the names, but the lives of all of those that are listed on this memorial.”

While his name will not be added to the memorial until next year, the recent death of State Trooper Trevor Casper was also mentioned at several points. Casper was fatally shot during a shootout with a robbery suspect on March 24 in Fond du Lac.