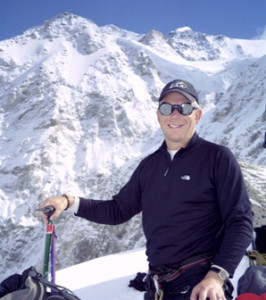 For a Fond du Lac man, there are many things to remember about surviving an earthquake while climbing Mt. Everest. However, Andy Land says the people he met coming down the mountain will be among the main memories he holds on to.

Land was part of an expedition team that was climbing Everest when a massive earthquake hit Nepal last month, causing widespread devastation across the country. They were in a camp at about 21,000 feet during the quake, which remained safe, but realized about an hour later that the base camp about 3,000 feet below had been hit hard by an avalanche, leaving many people dead or injured. “We realized pretty quickly that we were alive, that we were going to be ok,” Land told affiliate KFIZ.

Land said his team abandoned their trip up the mountain, and decided to take their time and help people on their way back down. He’s a hospice nurse and others in his party had medical training. Among those he met along the way was a young girl in a village, who was excited to show him she could read and write English. Since returning home, that village was among those destroyed by a second earthquake that struck Nepal earlier this week. “It was really a powerful experience, and then I learned that her village was destroyed…she may be dead,” Land said.

Land was making the climb to help raise awareness for hospice care. Because of what happened, he believes the trip ended up getting far more attention than it would have if he had just made the summit.