You are here: Home / News / Governor Walker in Iowa again 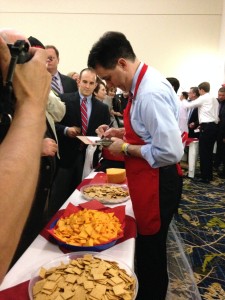 Wisconsin Governor Scott Walker’s latest trip to Iowa featured a 10-minute speech, a party with cheese and a photo from his childhood.

“I look a little geeky on the left there with my glasses on,” Walker said. “That’s my brother, David, and I, back in I think it was about ’75 or ’76, but mothers are good about keeping pictures like this.”

Walker was among 11 presidential hopefuls who spoke in Des Moines Saturday night at an Iowa Republican Party fundraiser and he had the photo projected on the big screens in the room. It’s a picture of young Walker and his brother — taken sometime when the family lived in Plainfield, Iowa — holding an Iowa Flag.

“The city hall didn’t have a state flag and I was already at that age, about 40 years ago, kind of interested in civics … and so we went around with a washed out mayonnaise jar that we cut a little slit in and my brother and I raised enough money to buy the flag,” Walker said. “… Stories like that are what’s great about Iowa, what’s great about the Midwest, what’s great about America.” Walker then launched into a speech that touched on themes he’s been emphasizing in this “exploratory phase” of his expected presidential campaign. Walker mentioned his recent trip to Israel and his tour of the country on an Israeli military helicopter.

“It is time to remind Israel they have an ally in the United States,” Walker said. “It is time to send a message around the world that we stand with our allies.” Saturday’s event wasn’t just about speeches from the stage. Walker was among the candidates who hosted after-parties one floor down from the banquet hall.

“We’ve got cheese and we’ve got ice cream. We’ve even got a Harley parked on the side there, so we’re going to have a lot of fun,” Walker said as he concluded his speech with the invitation to his hospitality room. People lined up to get Walker’s autograph. Walker’s campaign team had a D-J playing tunes and every so often giving away “cheese heads.”

It was at the Iowa GOP’s 2007 Lincoln Dinner that former Arkansas Governor Mike Huckabee garnered early attention. Huckabee’s after-party eight years ago featured a Bill Clinton impersonator and Huckabee playing guitar with his band, performing “Born To Be Wild.”