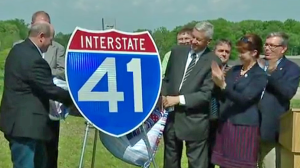 Motorists will soon start to see new Interstate 41 signs on while driving from the Wisconsin-Illinois border all the way northward through the Green Bay area.

The Wisconsin Department of Transportation showed off the new signs on Thursday at a press conference. The road went from U.S. Highway 41 to Interstate 41 last month.

Wisconsin Lt. Governor Rebecca Kleefisch, while displaying the sign, said, “Ten years in the making. I know seeing 3,000 of these signs is going to be a welcome thing for economic development but also for the citizens of Wisconsin.”

Many of the dignitaries attending lamented that it took that long to arrive at this destination.

“The end of a really long and arduous process. This was a real team effort and many, many people played a role in the creation of Interstate 41,” said DOT Secretary Mark Gottlieb.

One of the key contributors to this designation was former Wisconsin Congressman Tom Petri. He explained the significance of this change.

“Interstate highways are the safest roads we have and it also means jobs in the area,” said Petri. “Everyone in the world knows what a U.S. Interstate highway is and it’s a hook on which you can promote yourself.”

Crews will start putting up the signs within the next few weeks, completing the installation by November. It returns to U.S. Highway status north of Howard.