You are here: Home / News / Johnson ready for Feingold rematch 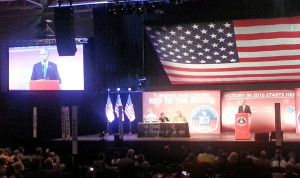 With Democrat Russ Feingold’s announcement that he plans to enter the U.S. Senate race next year, the candidate who unseated him in 2010 says he’s ready for the rematch.

Speaking at the Wisconsin Republican Party’s state convention in La Crosse Saturday, U.S. Senator Ron Johnson (R-WI) told delegates that he was, at first, surprised to see Feingold announce his candidacy so early. However, the more he thought about it, Johnson said it made sense. “Russ Feingold’s a career politician, he’s just addicted to it,” Johnson said. “He just can’t stand being away from it, so he’s gotta announce.”

Johnson took aim at Feingold several times during his convention speech, telling delegates that it’s “crucial” that the Middleton Democrat not be allowed to win in 2016. The first term Senator vowed to “fight hard to win,” but added that he will still be the calmest person in the room on election night because he wins either way. Either he gets to go back to Washington or he gets to go home, something he said he would gladly do.

A Johnson-Feingold match in 2016 promises to be one of the most hotly contested Senate races in the nation, something Johnson admitted could mean a “vicious” campaign lies ahead. Despite that, he told the crowd he’s running again because he will “never give up hope” that he can bring about the reforms he set out to in Washington when first elected.