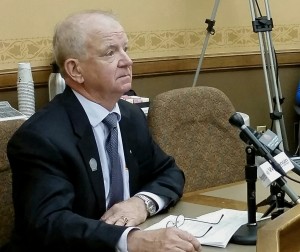 Assembly Republican James Edming of Glen Flora has introduced a bill to make high school grads and GED students pass the same civics test that immigrants must pass before they become U.S. citizens. “Under the bill, students would be given a 100 question immigration and naturalization exam pertaining to government and history. This exam is presently utilized by the United State Citizenship and Immigration Services.”

The Assembly Committee on State Affairs and Government Operations held a public hearing on the measure (AB-194) on Wednesday. Edming said students would have to correctly answer at least 60  of the 100 questions to pass. “It’s not rocket science.” He said the questions are basic things citizens should now. “What do the stripes on the American flag stand for?” And he said it’s multiple choice.

After being questioned by committee members, Edming said he’s open to amending the bill to consider non-English speaking students and those with special needs. Lawmakers also grilled him on how the test would be administered.

Wisconsin Department of Public Instruction opposes the bill, saying not everyone tests the same way and there’s no need for yet another test.

A vote on the measure has not yet been scheduled.