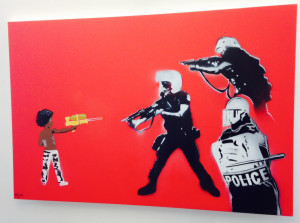 A new display at the Madison Central Library has drawn negative reactions in the law enforcement community for its portrayal of police officers. The painting, entitled “Don’t Shoot,” depicts three police officers dressed in riot gear, with the central figure pointing a weapon directly at a small black child, who is shown pointing a toy gun. The painting is accompanied by a statement from artist Mike Lroy.

This is reality. While many white people have the privilege of ignoring racial disparities and the killing of unarmed black men, this is a reality for countless black communities around the U.S. including Madison, WI. The aim of my piece “Don’t Shoot” is twofold. For those who have had the privilege of ignoring these gross injustices, I hope to startle, shock, and interrupt your reality. By visually representing the militarization of police through a painting, one cannot keep scrolling through a timeline or find another news station to watch; I will not allow this reality to escape without stirring emotion and provoking reflection. My second aim is to empower black individuals who are feeling angry, forgotten, and demonized by the mainstream narrative. Art is a positive outlet for expression, emotion, and activism. When viewing my piece, I challenge you to reflect on your identity and engage in meaningful, critical, and genuine dialogue with others about the social and political causes that have led to actions like the one depicted in “Don’t Shoot.”

“I can tell you that I’ve spoken with many officers in Madison that find this piece of art offensive, and they think it advances a patently negative law enforcement stereotype at the expense of all the great work and courageous deeds their officers perform every day,” said Jim Palmer, executive director of the Wisconsin Professional Police Association. Palmer’s group and the Madison Professional Police Officers Association issued a joint statement.

Palmer said the groups are not demanding that the display be taken down, but they have a right to voice their reaction. “I think they view display as a slap in the face,” he said, noting that MPD officers are in the downtown library on a daily basis. “We just don’t think it’s constructive to the public dialogue.” By mid-afternoon on Friday, Palmer said the library extended an offer to have a statement installed next to the painting, which the police groups accepted.

“Although law enforcement officers have the utmost respect for the value of artistic expression and free speech, we are deeply offended by the “Don’t Shoot” painting and the message it sends. While we appreciate that the anti-law enforcement sentiment expressed in this piece represents the feelings of some, this “stormtrooper” portrayal of police officers who appear to threaten a small child only serves to advance patently negative law enforcement stereotypes at the expense of the important and selfless jobs that our dedicated officers perform.

“This is a sensitive time in our nation. Strengthening the relationship between law enforcement and the people it serves is a serious matter that will require the balanced collaboration of many diverse views. The biased and hostile message advanced by this painting does little to contribute to that important public dialogue.

“Each day, officers wake up and go to work to protect their communities and its families. There is no greater calling. The men and women of the Madison Police Department are committed to one thing – protecting this city every day they put on the uniform, so that it can be safe for all of us.”

The controversy surrounding “Don’t Shoot” comes in the wake of the March fatal shooting of an unarmed black teen by a white Madison police officer. Madison residents, as well as police and local elected officials, are awaiting the decision from the Dane County District Attorney as to whether officer Matt Kenney will be criminally charged in the death of 19 year-old Tony Robinson. A state Division of Criminal Investigations report on the March 6 shooting was delivered to the DA’s office three weeks ago, and District Attorney Ismael Ozanne has said he will give at least 48 hours of public notice before announcing his decision.