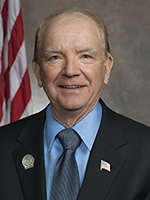 Assembly Republican James Edming of Glen Flora has introduced a bill to make high school grads and GED students pass the same civics test that immigrants must pass before they become U.S. citizens.

The Assembly State Affairs Committee will hold a public hearing on the measure on Wednesday.

The mandate would affect students in public schools, charter schools, and private schools that accept tax-funded vouchers. Edming says Wisconsin high schools need to instill the responsibilities of citizenship, and his measure would assure that graduates learn and understand the workings of the U.S. government.