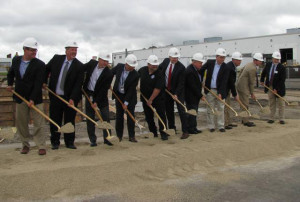 Mercury Marine is starting another major expansion at its headquarters in Fond du Lac. The company broke ground Wednesday on a planned 45,000 square foot state-of-the art facility that will be used to apply the anti-corrosive coating that protects marine engines and drive systems.

President John Pfeifer said it’s the latest part of a $580 million investment in the community since 2009, after the state approved incentives to keep the outboard boat engine maker from moving operations to Oklahoma.

Mercury Marine employs about 5,000 people throughout the world, and 2,800 in Fond du Lac. The company says the new facility will eventually lead to an increase in the numbers of jobs in the area.

Construction on the new addition is expected to be completed by December of 2016.